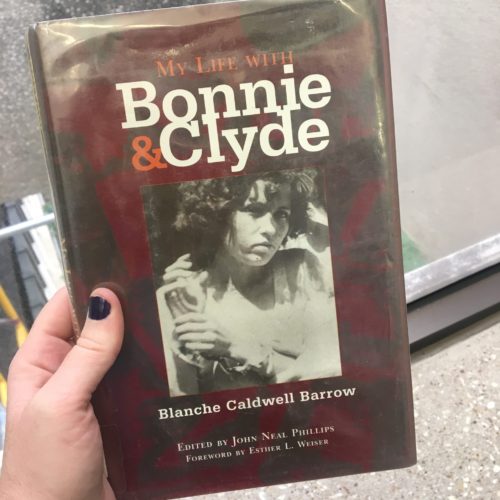 It’s been a minute since I’ve read these, but when I was initially writing The Case of Bonnie and Clyde, I read as many firsthand accounts of the gang’s life as I could.

The best by far was My Life with Bonnie & Clyde by Blanche Caldwell Barrow. She wrote most of the account during her 10 year prison sentence (she served from 1933-39) in Missouri after her capture in Iowa. The book was published (2004) some years after she passed away (1988). It was edited by John Neal Phillips, who has a hand in almost all of the memoirs I got ahold of.

She and everyone associated with the gang lived in fear the rest of their lives about being prosecuted, even 50 years on from the events. Blanche was married off to someone by her mother as a teen, and met Buck in West Dallas in late 1929 soon after leaving that marriage. By this point, Buck had been married and divorced twice (at 23) with three children.

They were married in 1931, after he’d been convicted of burglary, escaped, and been on his own spree of robberies with Blanche. She and the family convinced him to turn himself in at the end of 1931 in order to give him a chance to live an honest life after serving his time. He was released March 22, 1932 and immediately re-joined Blanche, then went to meet Clyde and Bonnie in Joplin.

Blanche claims they went to talk Clyde into turning himself in and ending all of the killings, but it’s unlikely that would have gotten very far as an idea. The gang was responsible for at least 5 deaths by that point, and one murder on Christmas Day of a young father (it was carried out by a teen gang member).

Blanche is generally credited with standing out enough that the gang got into a disastrous firefight in Missouri right outside Kansas City, where Buck was killed and she was captured. She was dressed unusually and paid for the gang’s lodging and food in coins.

She was blinded in one eye by glass shrapnel and Buck was shot in the head and didn’t recover. The gang made a getaway, but Blanche and Buck were ultimately captured a few days later in Iowa.

Despite spending most of the story defending herself and Buck from most of the charges against them, it gives a clear picture of what life was like for them in the ultimately short time they were part of the gang. She and Buck joined up with Parker and Barrow at the end of March, 1933 and were captured at the end of July that same year.

Less than a year after that, Bonnie and Clyde were dead. The following February, in 1935, about 20 family members and friends were rounded up and charged with harboring them. Their mothers spent 30 days in prison; the longest sentence was 2 years for the brother of another gang member.

After Blanche was released from prison, she moved back to Dallas to care for her father. She remarried in 1940, and lived in the Rockwall area (east of Dallas) until his death in 1969. Afterwards, John Neal Phillips said she was in the Mabank area (even further East), near some other Barrow relatives.

The detail I most remember from the book is that Mr. and Mrs. Barrow, Buck and Clyde’s parents, never got in touch with her. They didn’t contact her the entire time she was in prison, or afterwards when she was released. They were trying to put the whole thing behind them. Besides the time in jail, Mrs. Cumie Barrow in particular suffered, being shot by intruders and almost blinded, and several firebombing of her home well after her sons’ escapades.

I got the chance to drive around the neighborhood Laurel and Tom lived in recently, and was pretty happy with what I saw. Their neighborhood has retained a lot of it’s original charming character, and the number of new giant homes was fairly low.

They lived in a development called Greenland Hills, which was originally planned and started in 1923. Most of the houses were built within the next 10 years, and by different builders. Almost all were a charming brick Tudor style.

This is an extremely rare look, then and today, and the homes are unbelievably cute. Beyond just brick, many also use local sandstone as a key feature. The high gables are distinctive.

In a funny coincidence, a friend bought a house right down the street from where the original inspiration for Laurel lived. It’s given me a kick to go visit and to see the neighborhood change and still retain much of it’s character. 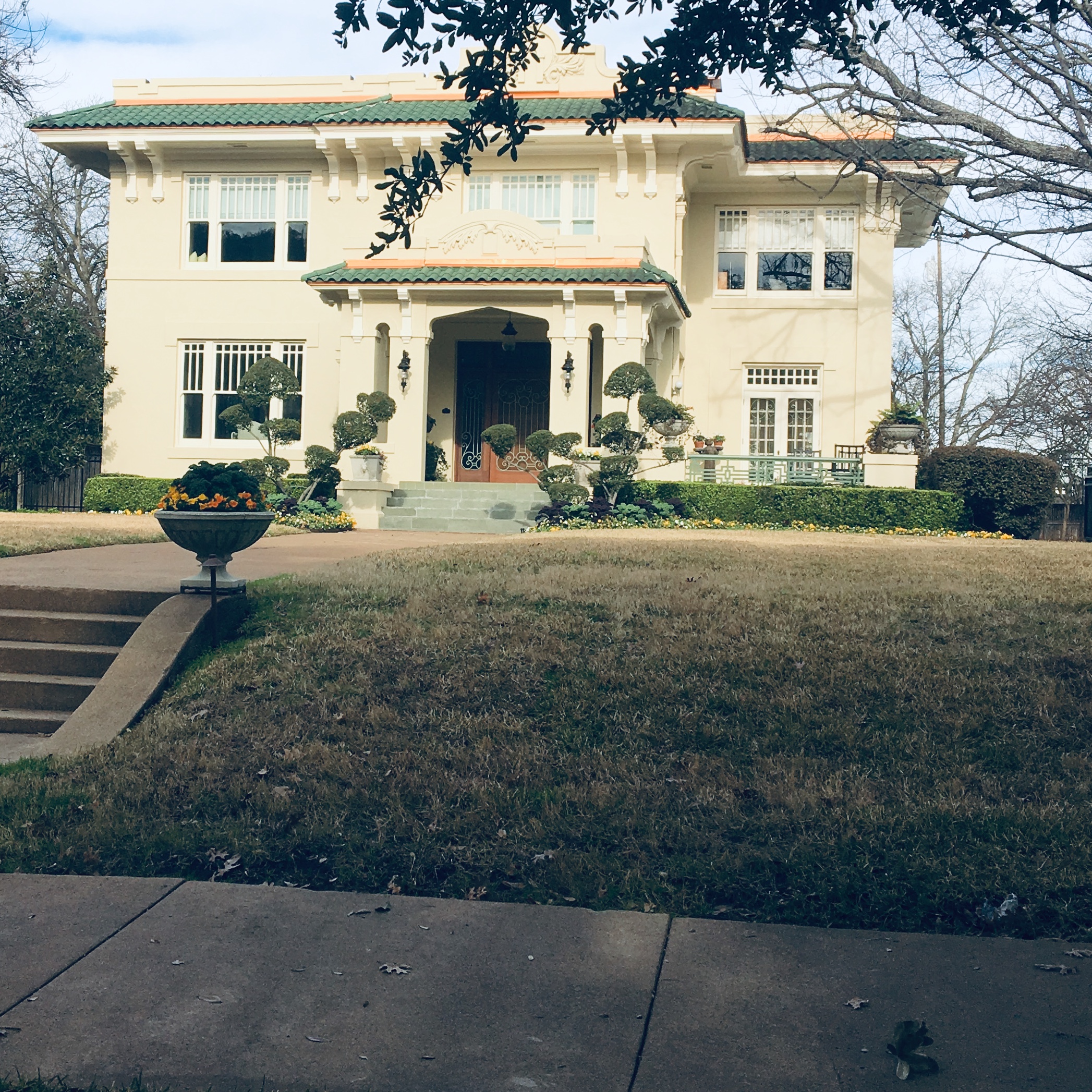 I was re-reading the Lost Prohibition book earlier this week, and it jogged my memory talking about wet and dry counties, and how people got around them.

Throughout Texas, each county made it’s own decision before Prohibition about what their stance on alcohol sales and consumption. Some counties chose to be dry, which meant all sales were prohibited.

According to this, by the time Prohibition was approved, the only places choosing to be wet were places with large concentrations of immigrants. In 1935, voters ratified a repeal of the state dry law, which meant the issue was kicked to the counties.

Some counties were wet, and allowed the sale of alcohol. It’s sometimes quite easy to see where the county lines are, because usually liquor stores sprang up on the wet side of a wet/dry county line. My college town was in a dry county for a long time, and there were ghosts of liquor stores, abandoned on country roadsides, just outside the invisible dry line.

Then there’s a lot of counties with various restrictions on what alcohol could be sold. The most common are only 4% alcohol beer is legal, or 14% or less alcoholic beverages are legal.

Even more confusing, some cities and town enacted their own dry or modified dry zones, in wet counties.

A quick google search shows that as of 2015, there are still seven counties that are entirely dry, four that are beer only and thirteen where less than 14% spirits are allowed . Additionally, there are 8 counties where alcohol can be sold and consumed at restaurants only.

The practical side effect of this is, that even today, there are places in the Dallas area where I have to “join” a “club” to order a drink. To join the club they usually just need your driver’s license. I don’t remember an actual, physical card being issued in the past few years, but I know when I first moved to Dallas that did happen a few times.

Here’s a great article that describes some of the more unusual counties and their drinking laws.

One of the counties listed, Collin, is where I’m remembering having to join a club to get my wine. Incidentally, Collin County is where the Dallas Cowboys new practice facility is, with a booming retail/restaurant/bar scene.

Just some interesting information about the weird and wacky rules that still stick around today. UPDATE – This article does a good job of covering some of the nuances. “Texas is slightly earlier than the nation, and slightly later than the nation in terms of how long its Prohibition was enforced.”

A few weeks ago, I decided to shake up my normal writing routine, and go to West Dallas to have a coffee and just play the tourist. I also had half a mind to go by and check out the Barrow garage that I saw on a history tour a few years ago. (The one where I saw Clyde and his brother Buck’s headstone.)

The building had been bought and moved by a private citizen to a main road in West Dallas. It’s completely un-marked, with no signs on the building or in the area. It is, however, marked on Google maps. I found it when I was studying the map closely after I couldn’t quite find it when driving on my own (I had it in my mind the building was white for some reason).

It looks like someone is sleeping on the back porch right now, or at least around enough to leave fresh beer bottles and cigarettes.

The next few shots are from the same spot, just one looking to the left (the pharmacy) and the next, looking across the street.

Here’s one last shot of the garage, the front door.

It was neat to see that it’s still around. When I was on the tour, those apartments weren’t there. They’re literally springing up everywhere in that area. I’m wondering now if there’s any plans for taking care of this building for when a developer buys the whole block up.